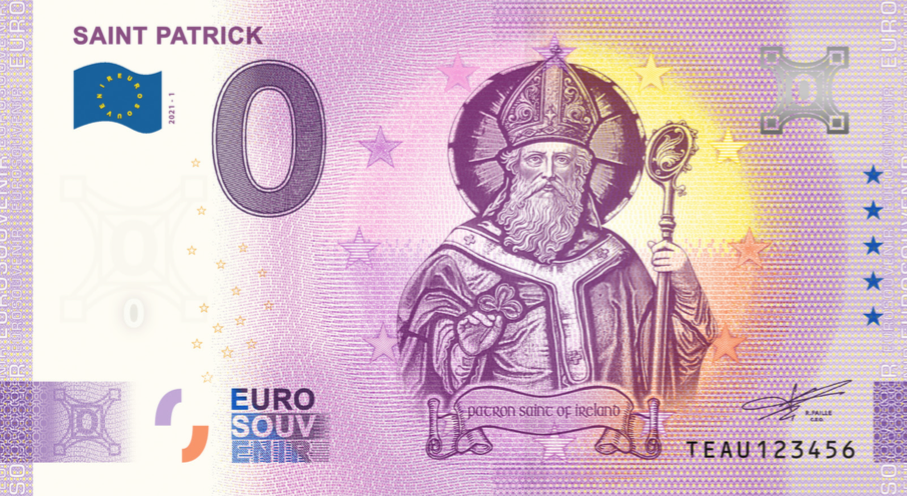 Each note will feature a picture of Saint Patrick on the front of the bill, holding his staff in one hand and a shamrock in the other, raised in a gesture of blessing. The words ‘Patron Saint of Ireland’ are also written below his image.

“After the events of the past year, we feel like the world could use a little more Irish luck,” said Peter Schneider, founder of Euro Note Souvenir, who produce life-like, but fiscally unusable notes for visitor attractions and tourists sites in Ireland and across the EU.

“St Patrick is known as the patron saint of good fortune, so we think having a bill with his likeness tucked away somewhere safe certainly wouldn’t do any harm,” he added.

The zero Euro notes are printed in the same facility which prints legitimate Euro banknotes, serving to increase their authenticity.

The company has previously honoured other iconic Irish images, including depicting the city of Dublin, revolutionary Michael Collins,  the Cliffs of Moher and even the RMS Titanic on notes in the past.

“Our selection process for our notes is two-fold,” Schneider added. “First, it has to be something or someone that we feel is truly worthy of being commemorated on a note. Second, it needs to be a figure that captures the imagination of the public. As a proud Irishman, St Patrick seemed to me like an obvious choice on both counts.”