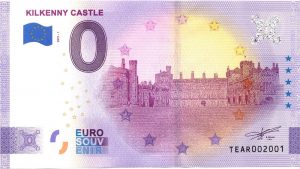 Kilkenny Castle (Irish: Caisleán Chill Chainnigh) is a castle in Kilkenny, Ireland built in 1195 to control a fording-point of the River Nore and the junction of several routeways. It was a symbol of Norman occupation and in its original thirteenth-century condition it would have formed an important element of the defences of the town with four large circular corner towers and a massive ditch, part of which can still be seen today on the Parade.

Kilkenny Castle has been an important site since Richard de Clare, 2nd Earl of Pembroke, commonly known as Strongbow constructed the first castle, probably a wooden structure, in the 12th century. The Anglo-Normans had established a castle in 1173, possibly on the site of an earlier residence of the Mac Giolla Phádraig kings of Osraighe. Kilkenny formed part of the lordship of Leinster, which was granted to Strongbow. Strongbow’s daughter and heiress, Isabel married William Marshall in 1189.